It was an area of ophthalmology, which became depressing as patients with early signs of wet AMD were told they would inevitably lose their central vision.

I remember the first time I told a delightful old man who was an avid reader that he had wet AMD. I knew full well that in time he would find it increasingly harder and harder to do the one activity that he lived for. The saving grace was that I could tell him that he would always retain his peripheral vision and that he would not be plunged into blackness, which he had deeply feared.

At that time, there was exciting work starting on potential treatments for wet AMD.

Laser photocoagulation had extensively been used to treat a variety of eye diseases and there were early attempts to fire lasers at the abnormal blood vessels under the retina in wet AMD.

The problem was that by their very nature they cause a lot of collateral damage and one side effect was burning the retina – the one tissue you were trying to preserve. Laser treatment for wet AMD was abandoned.

It worked for some patients and not others. It did not improve their vision but stabilized it. Still an improvement, I suppose.

The next treatment was a giant step for ophthalmology. We get them very 10 year or so.

The molecule that drives the growth of the abnormal blood vessels under the retina in wet AMD was identified as vascular endothelial growth factor or VEGF.

Many millions of pounds later, a molecule that inhibits VEGF (an anti-VEGF) was manufactured.

Interestingly, colon cancer specialists were also looking to reverse blood vessel growth in colon cancer and came up with a similar anti-VEGF treatment.

The problem with the lucentis medicine and wet AMD was getting it to the area where it is needed. Inside the eye.

The only effective way of delivering the medicine was to inject it into the vitreous cavity of the eyeball. It doesn’t sound pleasant at all I agree. It is highly effective however.

The second problem with anti-VEGFs and wet AMD is that it doesn’t last very long. About a month and it wears off. We know that wet AMD can take a while to respond to treatment and that’s why many monthly injections are needed to treat the condition.

The third problem is that it is a costly medicine. More costly given that it needs to be given every month for several months.

To reduce the cost of the treatment, some eye doctors can safely offer avastin instead of lucentis. The cost of avastin used for colon cancer is far cheaper than lucentis. It is not licensed for eye use and it should be used in the hands of an expert eye doctor.

The next evolution of treatment was to manufacture a medicine that lasted longer than 1 month. There is now a medicine called Eylea (aflibercept), which can be given every 2 months to the back of the eye and works just as well as lucentis.

The holy grail of wet AMD treatment is to develop a medicine that can be taken by tablet or drop form. I am sure we are not that far away.

It’s a shame that my dear old first patient did not have the options you have today. He would undoubtedly be enjoying his passion of reading.

Make an appointment to see me today and we can discuss all the possible treatment options available to you to keep your passion in life going.

Get the free UK Guide to AMD now: 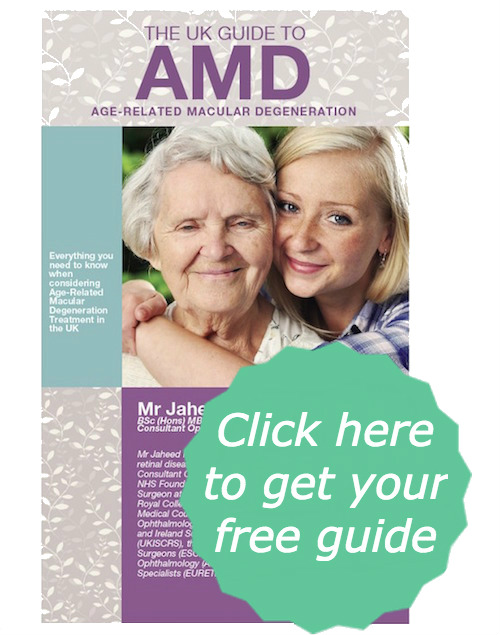